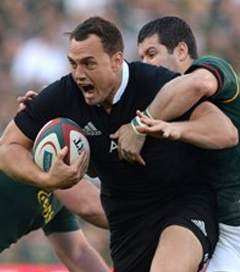 ABs vs Boks: The Greatest Match Ever?

The All Blacks retain the Rugby Championship with an epic 38-27 win over the Springboks at the South African spiritual home of rugby, Ellis Park.  Described as “a match that ranks among the greatest ever between these two rugby-mad nations…where the pace never dipped below warp speed” (Telegraph) and where even the ref, Nigel Owens, had to receive attention from the physio due to the pace of the game.  The All Blacks were able to score five tries to the Boks four and overcome two yellow cards, travel and a punishing onslaught by a determined home side in front of nearly 64,000 spectators and take their fourth-ever victory at the elusive Ellis Park (2013, 1997, 1992 and 1928).