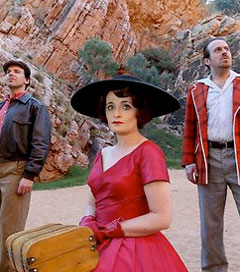 Abandoned Sola in the Outback

New Zealand-born soprano Katherine Wiles is starring as Donna Elvira in an outback tour of Mozart’s Don Giovanni by Oz Opera, Opera Australia’s touring arm. Wiles said she was excited at embarking on her first red-centre tour, which opened in Alice Springs and will also take in Darwin and Tennant Creek.

Local indigenous musicians are expected to perform with the orchestra before and after the Tennant Creek performance, which for the first time will be streamed live into three remote indigenous communities.

The opera has been given a classic La Dolce Vita-style makeover by director Michael Gown and designer Robert Kemp.

Wiles has a Masters in Opera from the Royal Scottish Academy of Music and Drama. She lives in Sydney.