Its Saturday. 24th July 2021. I’ve got other mahi to do but my soul tells me to write, if only briefly. I’ve got profound views on current worldly issues to share with you in essays yet to come. But, let me first step, for a written moment, into the sphere of the metaphysical. 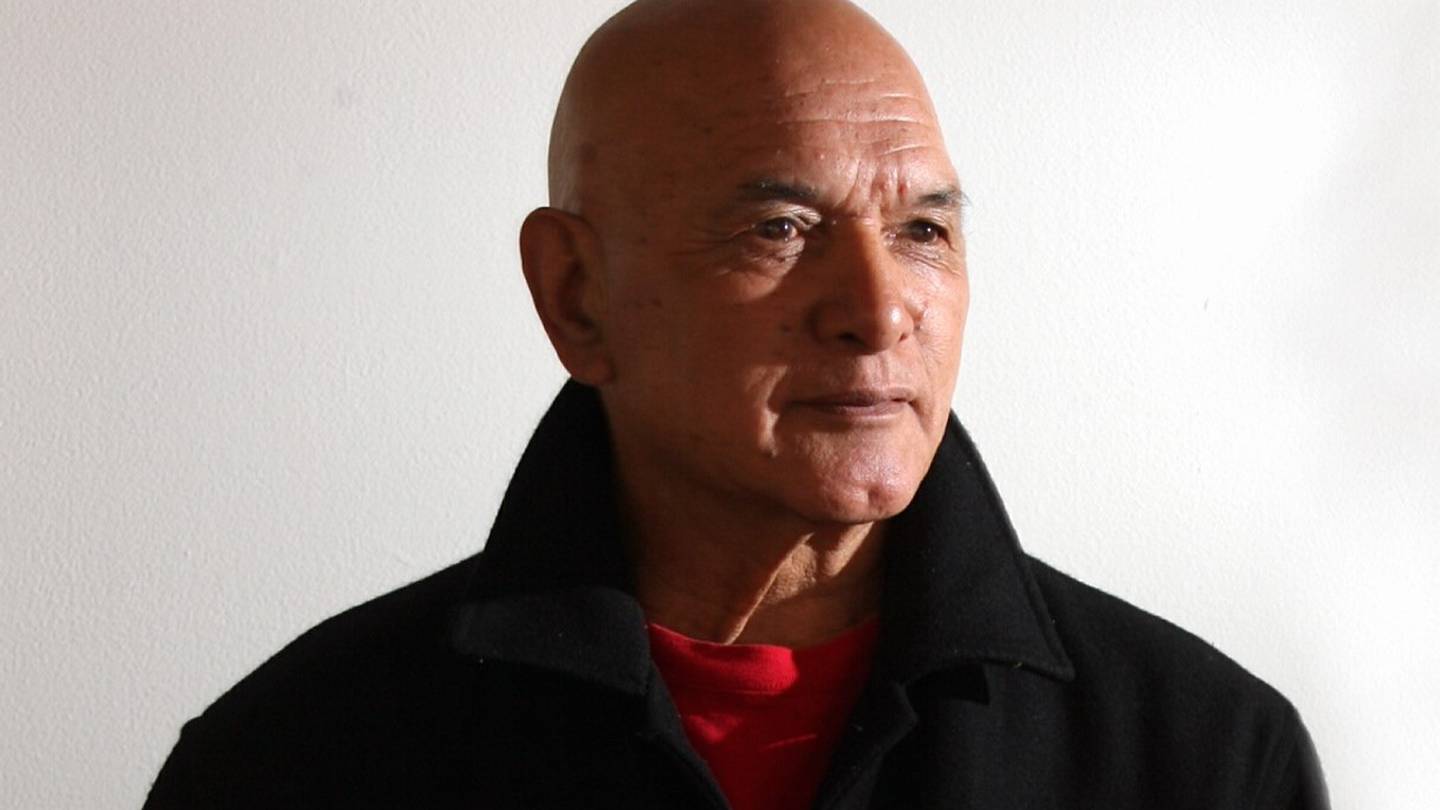 Yesterday, Friday, we said goodbye to Paratene Temokopuorongo Matchitt aged 88. By ‘we’ I mean a disparate collection of whanau and friends, artists like Jacob Scott and Baye Riddell, and tribal figures such as matua Bevan Taylor from Kohupatiki, Sir Wira Gardiner, Hekia Parata and Doug Hauraki.

I had given Para my poroporoaki the day before as he lay in state at his studio in Ahuriri, Napier. Para was reluctant about having a send-off. He wanted it simple. No trek to a far-away ancestral marae as happened with Ralph Hotere. Just a mingle at the Hastings Crematorium to the background of his favourite music.

The only art on show was Para’s coffin, and the cover of his minimalistic ‘order of service’. Words of farewell briefly spoken by his daughter Marita and many more by a nephew, Erueti Korewha. Music played. The curtain fell, literally.

Para’s waka to the afterlife was constructed of recycled native timber, more substantive material than that of most coffins the crematorium has previously encountered. I imagine that the furnace chimney glowed like never before, and, that amongst Para’s bone and bodily ash would be bits of iron, demolition detritus, just as the creative rebel would have desired. 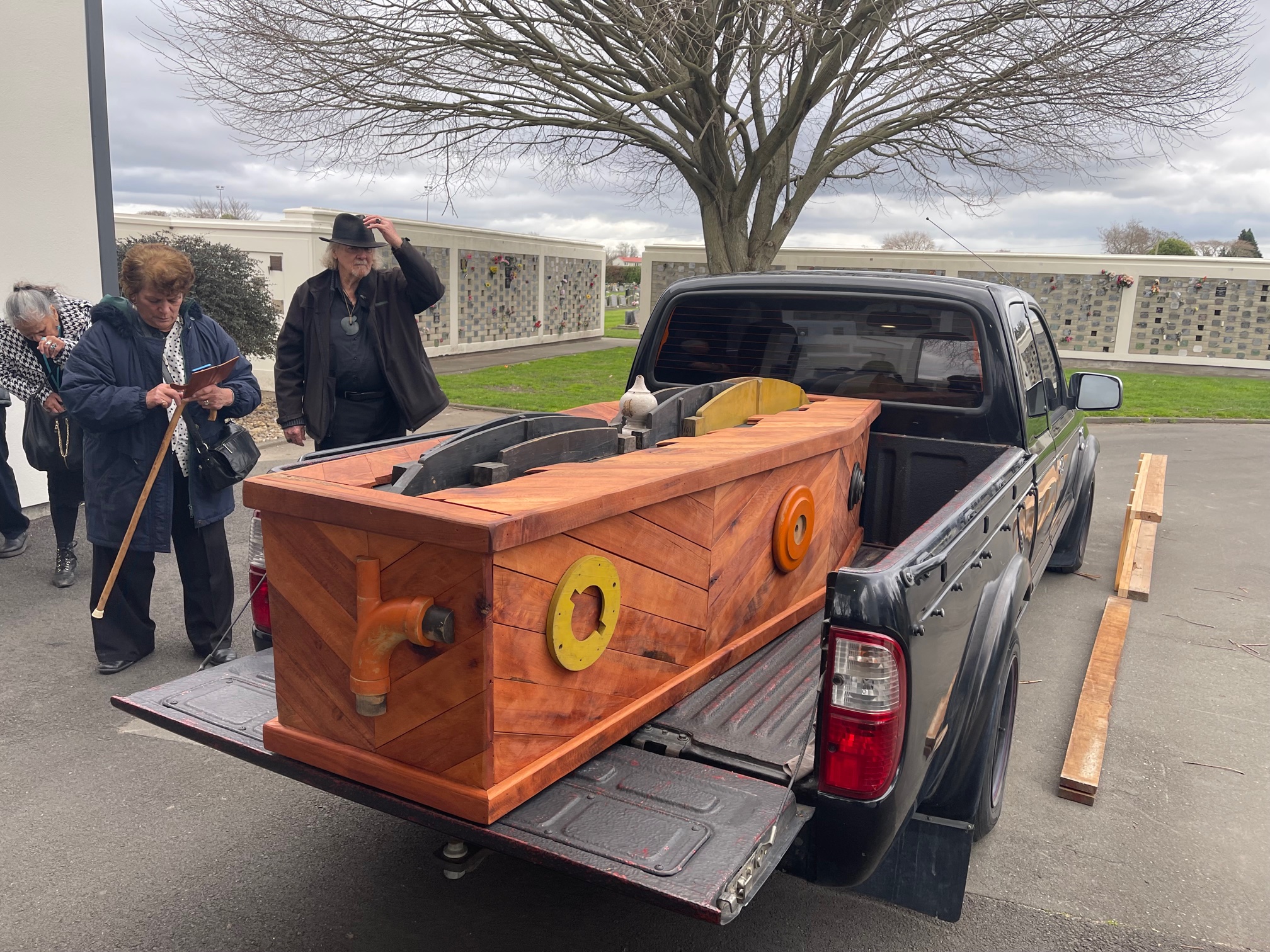 A chap whose name I should know but have clearly forgotten approached me. He said he wanted to come and talk with me. He had asked Para why Para kept creating works associated with Te Wepu and Te Kooti Arikirangi. Whilst these renditions don’t define Para’s art, the recurrent motifs are a feature of much of his work in the latter part of his life. 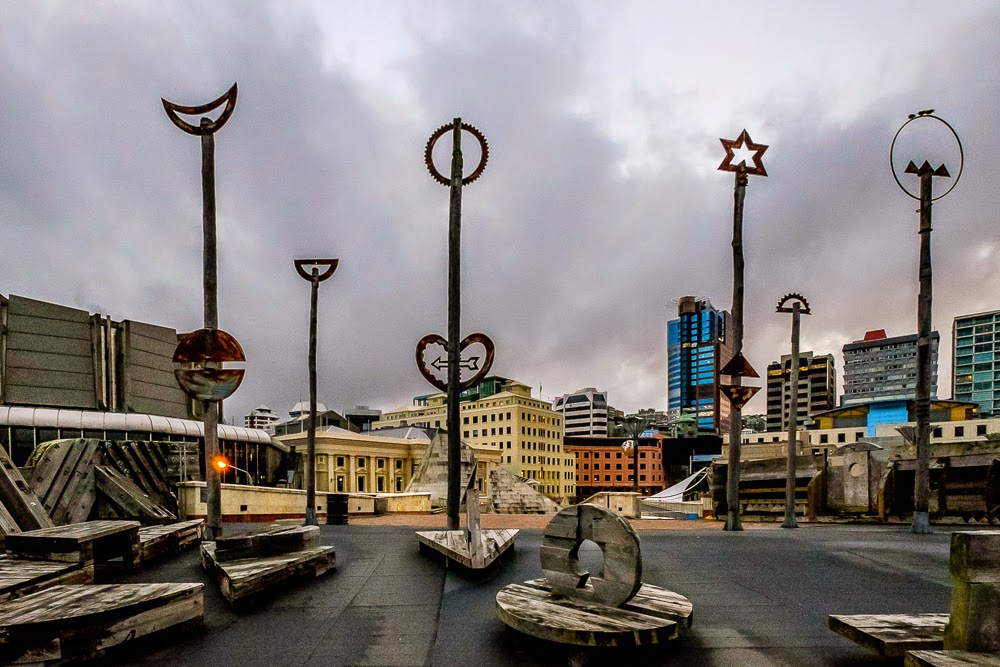 Para’s work on the bridge at Wellington Civic Square

Para told this guy “Ask Denis O’Reilly” to tell him about Te Wepu and its local association. I’m pleased to share what I think about Para’s intent now. Who knows the true mind of an artist? Therein lies the magic. Icons generated from the imagination of a female Catholic missionary are transformed to become symbols of Maori resistance.

Wepu, the whip, named so by Te Kooti probably because of its cracking sound in as it fluttered in the wind, was a long pendant shaped banner of red French silk. It was stitched in the latter half of the 1860’s at the Marist enclave at Meeanee, just out of Taradale, by Mother Mary Aubert and her Sisters’ of Compassion. At its greatest breadth it was 4ft. It tapered to a point at 52ft in length. The haki (flag) was gifted to a local Ahuriri Rangatira, Renata Kawepo (Ngāi Te Ūpokoiri, Ngāti Kahungunu). The flag featured a heart penetrated by an arrow, a mountain, a crescent moon, a star and a cross. It proposed a redemptive narrative for the Maori people.

Sometime around 1868 it was captured by Te Kooti after his return to Aotearoa on the Rifleman. Te Wepu was carried by one of Te Kooti’s most ferocious warriors, Edward Baker McLean, a reputed ‘half caste’, known otherwise as Peka Makarini. Peka Makarini was reputedly shot dead in 1870 by Gilbert Mair at Rotokakahi and Te Wepu was captured and ‘decommissioned’. Apparently, it was deposited in the Dominion Museum where it was ‘mistreated’ and ultimately destroyed (so it is said, but….).

In the 1980’s we had a workscheme at Otatara. Para, and Jacob Scott, organised our ‘student’ troops to recover demolition materials, particularly from an old woollen mill up Main St on Mataruahou, the “Napier Hill”. The mill was just below the site of the Gore Browne military barracks where British troops were stationed in the 1860’s.

Para created a 7m x 7m seven section rendition of Te Wepu from this demolition timber. He saw this ‘repurposing’ as having both historical and cultural symbolism. This Te Wepu work was installed at the National Art Gallery in 1986. It was as a stark juxtaposition to the Te Maori Exhibition then on display in the gallery below.

Rangihiroa Panoho said of the work
“Te Wepu draws on Western modernism’s contrapuntal tradition of critiquing legacy and attacking the orthodoxy that Te Maori promoted. In this way Matchitt’s wooden assemblage reflects the ideological and aesthetic struggle that contemporary Maori artists can experience with institutions when the latter endorse only one particular type of Maori art”. 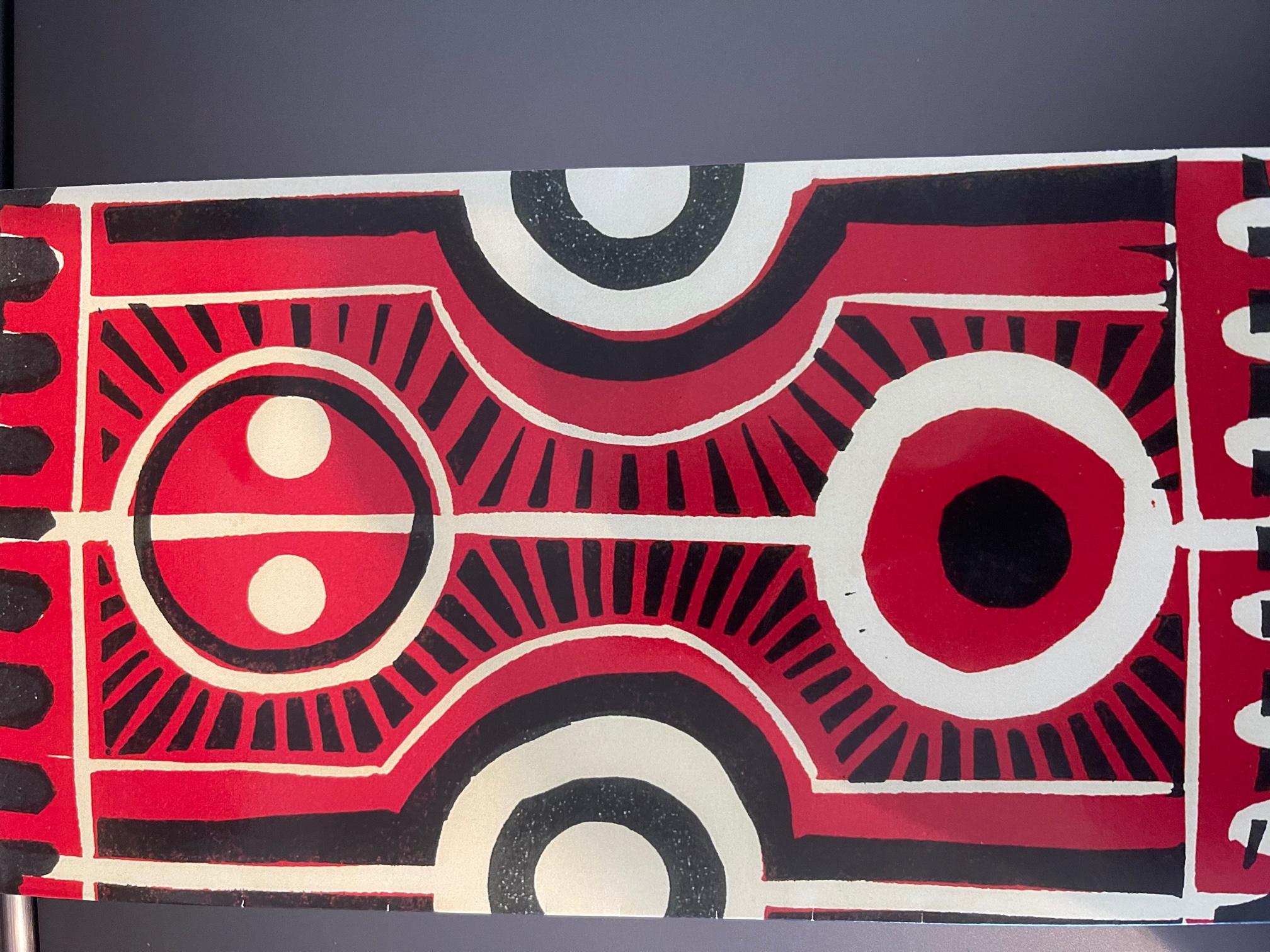 Cover to Para’s order of Service

Fast forward to 2008. Our mutual friend Paris Magdalinos had died and the hapu Ngati Paarau consented to Paris being laid for a time at Waiohiki. Para bought sculptures from his Te Wepu series including a four-metre sculpture “Te Kooti on a horse at Waikaremoana” for the event to celebrate Paris’ creativity and to signal that his contribution to the architecture of the marae mattered. 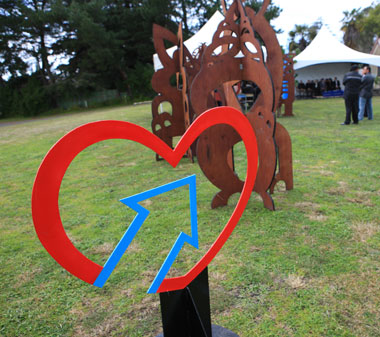 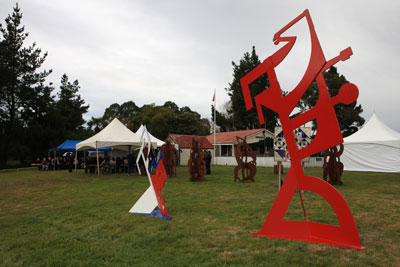 Te Kooti on a Horse at Waikaremoana

Waiohiki was the home base for Tareha Te Moananui who pursued Te Kooti, and so Te Kooti’s representational presence on the Waiohiki marae was a nod, perhaps a headbutt even, to past, present, and future. Te Kooti’s fellow Pai Marie, Kereopa Te Rau, is buried in the urupa opposite the Waiohiki marae, brought there by Mother Mary Aubert and Tareha, after his unjust execution, as a testament to the unbreakable ties of whakapapa.

Para’s artworks at Waiohiki that day were dynamic, paradoxical, contradictory, weaving te hau muri, the past with te hau mua, the future. Paris had designed our new wharenui Hau Te Ananui, completed and opened only this year, some 13 years after Paris’ death. The wharenui houses the poutokomanawa Te Kauru o Te Rangi, one of those ‘orthodox’ examples of Maori art on display at the National Museum in 1986 when Para installed ‘Te Wepu’. 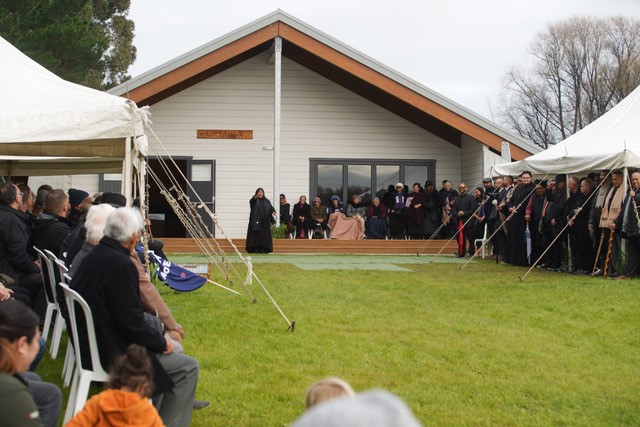 Paratene Temokopuorongo Matchitt was rebellious to the last. As Jimmy Baxter put it in his Letter to Sam Hunt

But I must go on my way still
Across Death Brig and up Skull Hill
Te learn the science of our grief
Conversing with the Impenitent Thief
That one unique left-handed saint
Who knows why we must write and paint.