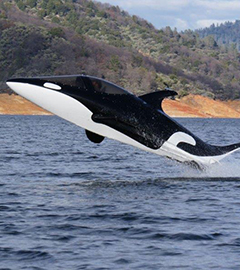 It looks like an Orca breaching the water in pursuit of its favourite stingray prey. But it is in fact the high performance “hot rod for the water” that is the brainchild of California-based Kiwi designer Rob Innes, a hot rod and performance boat enthusiast.

The 260 horsepower vessel capable of diving to depths of 1.5m, achieve speeds of 64kmh on the surface and 32kmh under the water is now certified for commercial use in Australia and New Zealand and Innes and his partner, Dan Piazza, are confident of quickly conquering other territories.

The Seabreacher’s ability to hurl itself clear of the water is certainly eye-catching – and users of the high-speed hybrid submarine attest to the adrenalin-fuelled exhilaration when executing the manoeuvre.

“The key is to push deeper than you think,” writes Sally Dominguez in the Sydney Morning Herald. She tested the vehicle’s limits at Queenstown.

“We could dive to over a metre before the snorkel would submerge and cut power to the engine, then maintain acceleration and aim for the sky,” she continues. “It’s literally a leap of faith and I finally nail a big jump in one of the most exhilarating moments I have experienced.”

The Seabreacher is custom sculpted in fibreglass and Kevlar to the client’s requirements and is fitted with a sealed clear polycarbonate canopy. It is equipped with a three cylinder 1500cc four-stroke Rotax jet-ski engine and comes with a price tag of around $100,000, depending on the degree of customisation.

It sounds steep but, says Dominguez, “once driven, that price seems ludicrously reasonable”.

The Orca livery is popular but newer iterations include a great white shark or hammerhead.