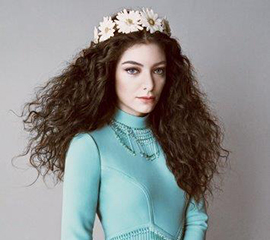 Ella Yellich-O’Connor stares at the reader from the pages of Vogue magazine looking wraithlike, almost like another famous alien fallen to earth. This Lorde looks quite unlike the girl from Devonport who improbably conquered the globe and made New Zealand famous for something other than rugby.

It’s as apt a description as any, and the strangeness of seeing a New Zealander gracing the pages of the world’s most famous fashion magazine is best summarised by a Daily Mail headline noting the occasion: “Good Lorde, she’s in Vogue!”

O’Connor acquits herself well in the interview, again surprising with her acuity and self-possession (qualities she admires in her musical heroes, Grace Jones and David Bowie).

Visiting the US, she says, feels like coming home because of the familiarity of the culture and the places that have been beamed into New Zealand television sets for longer than her 17 years: “Every film is set here and every TV show,” she says of New York, before noting that it also feels like another planet.

Heller is clearly charmed by his subject and is full of praise – “industrious, imaginative and intellectually precocious,” while Lorde’s lyrics are “experientially evocative and quietly anthemic”.

“Her music is cool, rhythmic and pared-down, combining the beats of the European dance floor with haunting synth overlays and pure voice melody,” Heller writes.

The intellect is on full display, as O’Conner name-checks Raymond Carver, Alice Munro, Kurt Vonnegut and Tobias Wolff. Older readers may well be rushing to check out new American authors Wells Tower and Claire Vaye Watkins, who she places on the same shelf as the old masters.

All are prodigious short-story writers, her favourite form of fiction and one she likens to her craft: “It’s much more similar to songwriting for me – having to make something big and get it into a small space.

“A lot of the writers that I like aren’t really about narrative; they’re just about perfectly formed sentences … one word or five words that sit perfectly.”

Photo by Tom Munro for Vogue