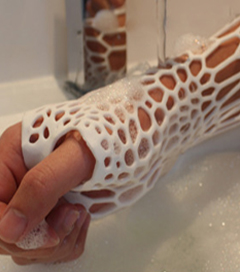 A new prototype cast, researched and designed by Victoria University of Wellington graduate, has been making its way onto international design blogs, and has recently just won the New Zealand leg of the James Dyson Awards.

Inspired by the experience of having to wear a typical plaster cast when he broke his hand, 21 year-old designer, Jake Evill, went about designing a modern cast to do away with the bulky, heavy, smelly, itchy one had to endure. The result was a spiderweb-like extroskeletal cast, dubbed Cortex, that is completely breathable, waterproof, lightweight and, unlike traditional cast, is recyclable.

Evill worked with the University’s orthopaedic department on the project, and uses data from both and x-ray and a 3D scan of a patent’s fracture to create a custom-made cast that offers greater support around the fracture itself.

Using a 3D printer, the case can be made on-site and clipped into place with fastening that can’t be undone until the healing process is complete and is removed with tools at a hospital.

“At the moment, 3D printing of the cast takes around three hours whereas a plaster cast is three to nine minutes, but requires 24-72 hours to be fully set,” says Evill. “With the improvement of 3D printing, we could see a big reduction in the time it takes to print in the future.”

Having won the New Zealand leg of the James Dyson Award, Evill’s design will go on to compete for the international James Dyson Award competition, where it could win the equivalent of $73,000 to help commercialise the idea.