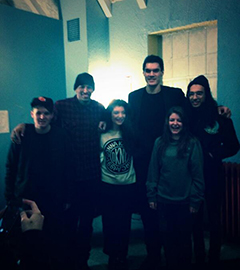 21 March 2014 – The long and the short of it is if you’re a Kiwi in America you support one another. New Zealand’s two most famous US exports – basketball prodigy Steven Adams and musical wunderkind Lorde – found themselves in Chicago at the same time and each made a point of attending their respective gigs: Lorde at the Aragon Ballroom; Adams’ Oklahoma Thunder playing the Chicago Bulls.

The Thunder’s gig was Monday night and Lorde live-tweeted her take on the game, prompting SBNation.com to comment that it was as “if an alien visited a sporting a event, learned English and Twitter and beamed its observations back to space – and it’s actually perfect”.

“This is so intense,” she tweeted. “How does everyone in this room not have a stress ulcer?”

If anything, it was Adams that was the most star-struck. Oklahoma media, News OK, reports that Adams’ teammates were teasing the star rookie about his ardent desire to attend Lorde’s concert on Tuesday.

A good night was had, as evidenced by the backstage group photo shared online, with the 2.13m centre towering over the 1.65m songstress.

Adams told News OK that Ella Yelich-O’Connor was “real cool, just a chilled out chick. She was going through what I was going through, it being weird meeting people who’ve got [your] name but you don’t actually know about them.”

He was clear, however, who was the real celebrity: “She definitely is. She’s the No. 1 superstar.”

For the record, Adams’ Thunder beat the Bulls 97-85, while the Chicago Tribune reports that Mayor Rahm Emanuel also attended Lorde’s show, which wowed the crowd and cemented her reputation as the voice of a smart, sceptical, outsider generation.