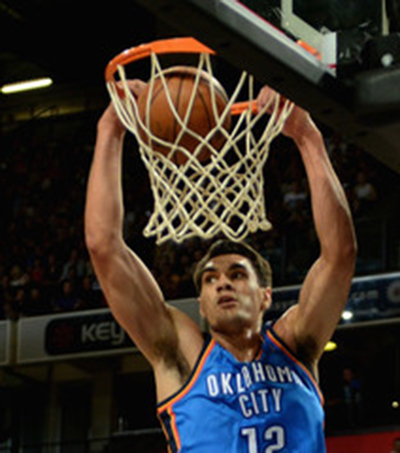 Steven Adams is developing a bruising reputation in his debut season with the Oklahoma City Thunder in the NBA. Adams has been the cause of five incidents that have resulted in an ejection, suspension, fine or combination of the three.

They now call him “Stone Cold”. Certainly his value to the Thunder is increasing with every game.

A constant refrain, from both fans and his opponents, has been the physicality of Adams’ play. He’s constantly in their face and doesn’t mind copping a few elbows, fists and headbutts if it gets the team ahead.

Key to his performance is his cool demeanour, literally under fire, and his lack of retaliation to the on-court pugilism.

The Oklahoman’s Anthony Slater singles out the Vince Carter incident as his favourite bit of Adams biffo.

“After grabbing an offensive rebound, Adams smoked Carter with an inadvertent elbow,” Slater writes. “Carter took a brief look at the ref, who didn’t call the offensive foul, then took matters into his own hands, bursting toward Adams and delivering a flying elbow to the side of the head.

“Stone Cold [Adams] just jogged back up the court with that stoic, robotic look.”

The Thunder have now qualified for the second round and face the Los Angeles Clippers in the semis.