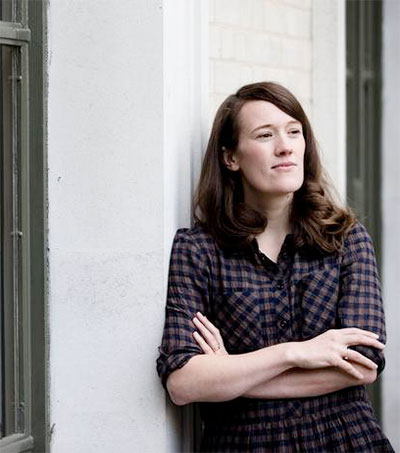 According to the Independent, New Zealand author Anna Smaill’s debut novel The Chimes is “superb … intriguing, ambitious and strikingly written.” Harper’s Bazaar tips it for “book of the year.”

The setting is a dystopian London in which glorious music (“Onestory”) has replaced language. Into this melodious world steps Simon, an orphaned young man desperate to piece together his fractured memories. Falling in with a “Pact” who forage for precious cargo known as “The Lady”, he slowly discovers that “Onestory” possesses unsettling undertones.

As her atmospheric evocation of London suggests, Smaill is no stranger to the city. She lived there with her novelist husband, Carl Shuker, while researching a PhD on modern American poetry at UCL. Indeed, inspiration for The Chimes first struck on a London bus after Smaill had quit a summer job in legal publishing.

The story’s origins reach even further back. Born in Auckland, she seemed set for a career in music. Smaill took up the violin aged seven. “I was an intense, solipsistic teenager seeking this all-consuming focus for my idealism. Music was that place. If I had been religious, I would probably have tried to join a nunnery.”

The Chimes too draws an appealing portrait of home – appropriate given that Smaill completed the novel after returning to New Zealand, albeit Wellington this time. After the grim mood of austerity London, this represented another creative liberation. “It felt like you were stepping into a Day-Glo experience of New Zealand. The natural world assaults you. You smell grass. The sun is so bright. There’s a freshness and a sense of possibility. The freedom of being in a place that has a strong literary culture and also a pre-existing Maori literature.”

Smaill has fulfilled a long-cherished creative desire. “I have always wanted to write a novel. It felt like playing a new and intoxicating game and you were always trying to discover the rules. It was challenging and difficult, but it was a lot of fun the whole way through.”