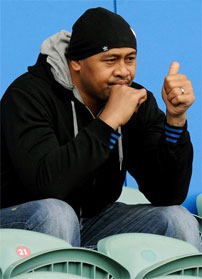 All Black legend Jonah Lomu surprised Australia’s players by dropping in on a training session ahead of their World Cup third place victory match against Wales. Auckland-born Lomu, 36, who was recently discharged from hospital after being admitted with kidney failure, mingled with the players and lifted the spirits of a Wallabies camp all but inconsolable after their semi-final defeat by the All Blacks last weekend. “Unbelievable. It was pretty crazy to have him there. He made the players train better,” wide-eyed Wallabies full-back Kurtley Beale said. The modern-day Wallabies were in thrall of Lomu, who rose to prominence with his devastating performances at the 1995 World Cup in South Africa and also played a major part in the All Blacks’ 1999 campaign. He still holds the record for most tries at the World Cup, with 15 in total. “He’s a well-respected man in the game and one of the legends,” Beale said of Lomu.