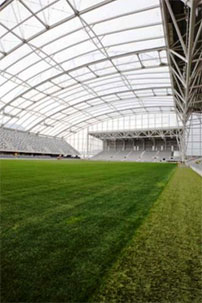 The world’s first permanently enclosed, natural turf stadium has been completed in Dunedin’s Forsyth Barr stadium to replace the famous Carisbrook House of Pain. The first game of rugby will be held under what has been termed the “space age transparent roof” on August 7. Populous senior principal and project director of Forsyth Barr stadium Richard Breslin said the design provides the multifunctionality and flexibility so it is positioned to be used by its community all year round. “Research by many people has created this final concept of a natural grass pitch growing under a permanent roof structure,” Breslin said. The stadium will also be New Zealand’s largest indoor event venue — it will host the singer songwriter Elton John, when he stages the first concert at the stadium in November this year.