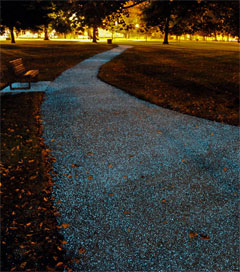 World-First Footpath Lights up the Way

New Zealander Hamish Scott has had offers from all over the world for what could be the future in street lighting – glow-in-the-dark footpaths, which light up when the sun goes down.

London-based Scott approached the Cambridge City Council to trial the surface and the authority was so pleased with the results it had plans to introduce it throughout the city, Scott said.

Scott, originally from Otaki, near Wellington, has been inundated with requests for the paths in other parts of England, the United States, Europe, South Africa, Japan, China, Australia and New Zealand as word has spread about the invention.

“It’s just another Kiwi invention,” Scott, who is originally from Otaki, told the New Zealand Herald.

The invention, protected under patents by Scott’s company Pro-Teq Surfacing, was installed by spraying a mix of ultraviolet particles onto a pathway and then sealing the surface. The path absorbs the day’s light and emits a glow at night.

The sealant also repels chewing gum and graffiti. It lasts at least 25 years and various colours can be used to suit surroundings.