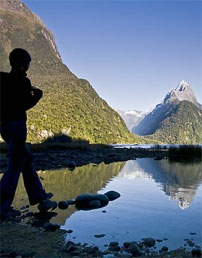 “It’s difficult to describe the wonder of Milford Sound,” an ‘Escape’ reporter writes for The Australian. “It’s probably best that someone puts a photograph in front of you. Words can’t do it justice. Even UNESCO fumbled with institutional language when it became a World Heritage Area in 1986. They went for ‘superlative natural phenomena’. So how did he describe it? Cunningly. ‘The eighth wonder of the world,’ Kipling declared. There you go. You really need to see it for yourself.”