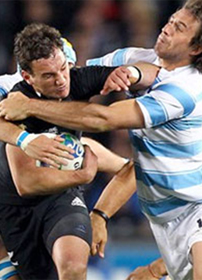 A blackout at Wellington’s Stadium “was an apt metaphor” for the All Blacks versus Argentina game, “with few highlights to speak about as both sides battled driving rain and swirling gale-force winds”, the Buenos Aires Herald reports. “New Zealand was victorious with two late tries from wingers Julian Savea and Cory Jane securing the 21-5 win. ‘They put us under a bit of pressure, but I was very happy with the way we came out in the second half. We played at the right end of the field and that pressure told in the end,’ All Blacks captain Richie McCaw said. The Pumas were brutal in defence and brilliant at controlling the tempo of the game as they slowed it down at every opportunity, meandering to lineouts and taking time to set their scrum.” The All Blacks next play South Africa in Dunedin on 15 September.