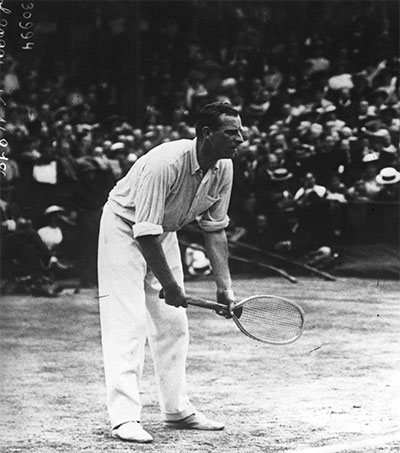 Wimbledon’s Anthony Wilding a Superstar of his Day

Long before the PR driven age of image rights and social media, before Borg, Laver and even Perry, Wimbledon had its own matinee idol – New Zealand-born Anthony Wilding. Yet despite him being a superstar of his day, and a war hero, why is there relatively little awareness of him today? The BBC looks back at Wilding’s on-court, and off-court, successes.

Wilding won four consecutive Wimbledon championships, two Australian Opens, and four Davis Cups, before his career was cut short due to the outbreak of World War One.

His incredible on court success was matched by his off court cult-following where, blessed with an irresistible mix of good looks and charisma, he became arguably the first superstar of tennis. He reportedly set many hearts a-flutter among spectators, with newspaper reports of a number of women fainting in the Wimbledon crowd, such was his charm.

But when World War One began he signed up for the British Army and was killed in action in France in 1915.

“Anthony was an icon and good looking,” says his great niece Anna Wilding, who is a journalist and actress.

“He was like a movie star, but on the tennis court. Tennis hasn’t ever had anyone like that, with that combination of charm, decorum and adventure. Imagine the Great Gatsby era, but he was the real deal, the toast of society. He stayed with kings and queens and prime ministers.”

He was seen as something of a pioneer in terms of his training. He never drank alcohol and, unusually for the times, never smoked. He was renowned for his physique, with his Davis Cup teammate Norman Brookes describing Wilding as “without doubt one of the finest specimens of manhood physically”.

Wilding’s obituary stated that even more than the New Zealand All Blacks, he had “carried the name of the Dominion into regions of the Earth where it was probably unknown until it became associated with his fame”.

“Anthony’s legacy is that he was a true sportsman, a great man, who was a hero on the court and off. We cannot forget he was also a great traveller and adventurer,” said Ms Wilding.