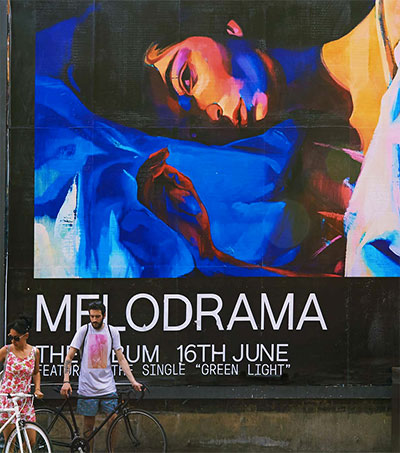 What Will Lorde Come up With Next?

Lorde’s Melodrama has made it into the top five of the Guardian’s 50 Best Albums of 2017, an LP the UK publication considers, “a work of insight, strength and gloriously self-aware wit.”

“On the face of it, Melodrama bore all the hallmarks of a disastrous second album waiting to happen. It was the work of an artist whose fame had removed her from the world that inspired her debut, a problem that’s bedevilled everyone from umpteen rappers to the Arctic Monkeys’ Alex Turner,” Guardian music critic Alex Petridis writes.

“But if Melodrama looked on paper like the work of an artist who’d had her head turned by success – or worse, a concerted effort to make Lorde a more straightforward, less idiosyncratic pop star – it turned out to be anything but.

“Whatever other impact success may have had on her life, it hasn’t blunted [Ella Yelich] O’Connor’s observation. The songs on Melodrama that depict the messy entanglements of early 20s life are as incisive, perceptive and shudder-inducingly familiar as the sketches of teenage suburbia on its predecessor.

“The music, meanwhile, demonstrated both O’Connor’s classic melodic facility (the shadow of glam-era Bowie hung over Liability’s beautiful descending chord sequence; Writer in the Dark was that rarest of things, a Kate Bush-influenced song that didn’t make you want to listen to Kate Bush instead) and her ability to twist latter-day pop to her own ends.

“Melodrama sounded like a uniquely talented artist imposing herself on mainstream pop rather than having mainstream pop imposed on her. It’s worth remembering that the woman who made it is 21 years old. It’s fascinating to think what she might do next.”