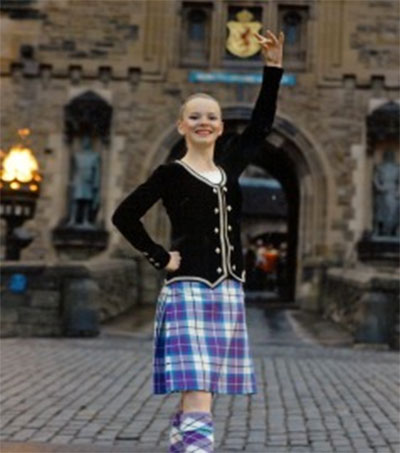 Whangarei Highland Dancer off to Tattoo

Seventeen-year-old Whangarei student Shannon Vesey will be the only New Zealander to dance as part of the Tattoo Highland Dancers at this year’s Royal Edinburgh Military Tattoo on in August.

Vesey will join 49 dancers from around the world who were selected after an extensive application and selection processes, part of which included a video audition.

The ‘Tattoo” is world renowned and performed with Edinburgh Castle as its backdrop. It has a live audience of around 220,000 with performers from all around the world, showcasing cultural, musical and dancing talent.

For Vesey, a year 13 student at Pompallier Catholic College, it will be the second time she has danced at the prestigious event.

In 2014 she was selected as part of a NZ Contingent of Highland Dancers to perform in Scotland. She also took part when the Tattoo travelled to Australia and New Zealand last year – but on that occasion her performance was in Wellington.

She says it’s likely her Scottish roots that first sparked the interest.

“I really appreciate the history that each dance has and every step has a story. It also is a great discipline requiring physical strength and fitness elements,” Vesey says.

“As a highland dancer, the Royal Edinburgh Military Tattoo is the most prestigious performance I can be a part of. It is even more of an honour to be the only highland dancer representing New Zealand in 2017.”