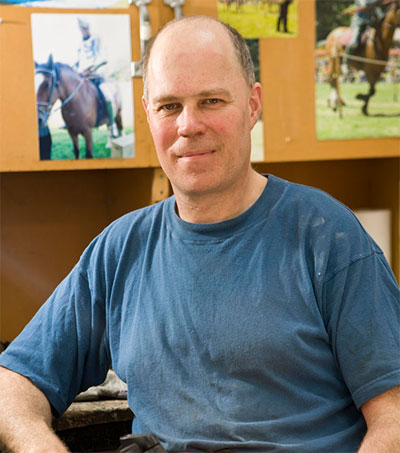 Amongst the colourful characters who flood the San Diego Convention Center Comic-Con was New Zealand smithy Peter Lyon, who has worked the past 16 years for Weta Workshop.

“When I started at Weta I was doing weapons and armour for re-enactors and collectors,” Lyon said at this year’s event. “It was just one of those incredibly lucky coincidences. I was living in the same city as [Weta founder] Richard Taylor, I had the skills he needed and it was the right time.”

He specialises in swords – almost any you see in the six films of Lord of The Rings and The Hobbit are his creations – though Weta’s upcoming work on the 2016 release Warcraft was done by much more modern means, he said.

“Those are a tribute to our 3-D modelling department,” he said standing beneath fanciful displays of the armour and weapons of the film based on Orange County-based Blizzard Entertainment’s mega-popular “World Of Warcraft” videogame. “They’re not limited by physics and reality, and while I could make them it would take a lot more time and money.”

Lyon, a self-taught swordsmith and armourer, was raised in Shannon.