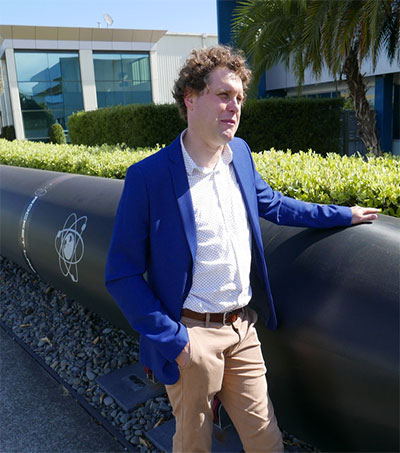 New Zealand has become the unlikely frontier in a drive to open a private rocket-launch site, servicing a soaring market for tiny satellites, many the size of a shoebox, Rob Taylor reports for the Wall Street Journal. New Zealand-born Peter Beck, founder of the California-based Rocket Lab is leading the mission.

Beck, whose company controls what it calls the world’s first private orbital-launch complex, sees the remote location as a help rather than hindrance – there is almost nothing but ocean between New Zealand and South America.

That gives Rocket Lab easy access to airspace, compared with the busy air and sea movements around the US, as well a bigger range of lucrative orbit paths.

Rocket Lab, backed by aerospace giant Lockheed Martin Corp., hopes to be the first company to begin commercially launching miniaturised satellites on a weekly basis from its own launch site. The company plans to use a newly constructed pad here and a two-stage ‘Electron’ rocket, built of carbon composite and 3D-printed, battery-powered engines.

On the Mahia Peninsula – a spit of mountainous farmland where Rocket Lab has built its launch pad – the space industry’s arrival hasn’t come without commotion. A “secret” here used to mean protecting prized surf breaks and lobster-fishing sites from summer tourists.

Farmers Pat and Sue O’Brien, who graze sheep and cattle beside the new launch-pad access road, say Rocket Lab’s arrival spawned conspiracy theories. “People are slowly getting the mindset Rocket Lab are a great big space freight company, rather than one carrying bombs and nuclear weapons,” Mr O’Brien said. “There have been some crazy questions at community meetings.”