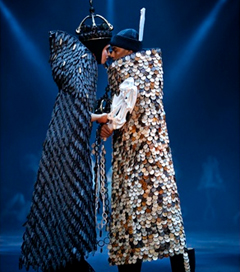 Vogue Italy contributor, Stefan Siegel, made the most of his recent visit to New Zealand for the World of Wearable Arts, deciding to use the time to get know the country’s landscapes, towns, and designers.

During his brief visit, Siegel was treated to some of the country’s most beautiful sights, and in his time he discovered a country in full support of the 25-year-old fashion and art event. “It didn’t matter whom I spoke to, the stewardess on my flight, the hosts of my lodge at Wanaka Haven, the helicopter pilot or even the owner of a petrol station in a town you have certainly never heard of; they all told me how much they loved the World Of WearableArt,” wrote Siegel.

As well as profiling WOW and providing Vogue Italy readers with photographs from this year’s show, Siegel highlighted established and emerging New Zealand designers – including Stolen Girlfriends Club, NOM*D, and jewellery designer Alexander Dodds – and a selection of vistas from his visit up and down the country.

Siegel spoke to designers about how the country influences designers.

“New Zealand is known for turning out lateral thinkers and designers in many fields, but many of this comes from having to make your work successful in a very small market. It’s a perfect incubator to stay away from dominant, mainstream labels — it’s a great place to foster creative and inspirational thinking,” explained clothing designer Vicki Taylor.