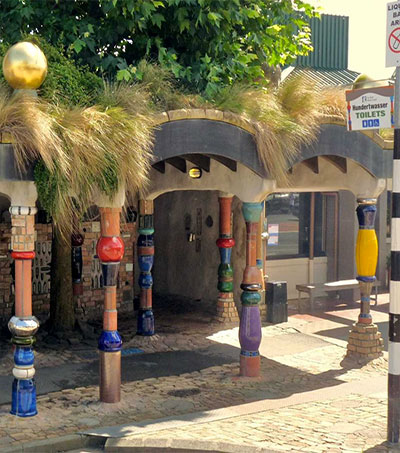 “One curved and cobbled path takes me from a strange yet mesmerising building in the former capital of the Austro-Hungarian Empire to a public convenience in New Zealand’s Northland,” Jill Illnamorati-Varley writes for the Australian.

“‘You must visit the Hundertwasserhaus,’ a colleague urged prior to my departure for Vienna, pointing to a print of a colourful if lopsided building that hung on his office wall. I hadn’t heard of Austrian architect, artist, sculptor and environmentalist Friedensreich Hundertwasser but ever curious, off I went.

“Built between 1983 and 1986, it is among Vienna’s most visited buildings … and then there’s the startling public toilet block just across the road dubbed the ‘Toilet of Modern Art’.

“[In New Zealand] on approach, mosaic signs of [Kawakawa’s] Viennese counterpart are apparent on the pavement leading to the toilet with its distinctive grass-tufted roof, bottle-glass windows and copper handwork, even down to a living tree integrated into the structure.

“Hundertwasser chose this unlikely rural township in the 1970s when he arrived in New Zealand to mount a public exhibition of his work. Reportedly taken by the beauty of the countryside, he bought a rural property on the Waikino peninsula and gradually spent more time there. When Kawakawa’s then 40-year-old toilet facilities needed to be upgraded in 1998, Hundertwasser, who believed a toilet, like a church, is a place of meditation, offered his creativity, saying the similarity between the two ‘is not so far-fetched’.

“Hundertwasser lent a hand supervising the construction, including the provision of materials from his studio. It was to be the last major project he undertook prior to his untimely death at sea, in 2000. Hundertwasser’s loo stands as his only structure in the southern hemisphere and is both a memorial to his artistic genius and a functional ‘mecca’ for his devotees and to latter-day converts such as me.”