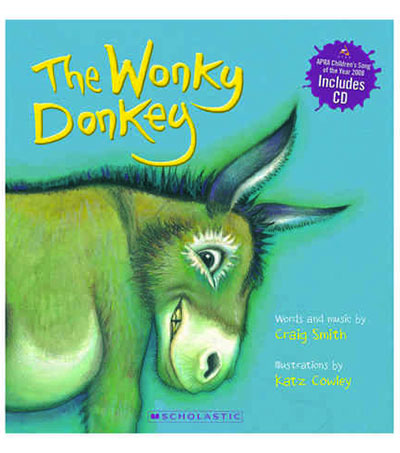 A Scottish grandmother’s reading of New Zealander Craig Smith’s 2009 children’s picture book The Wonky Donkey to her grandson in a home video has seen demand for it skyrocket around the world.

Smith’s book, based on his song of the same name, tells of a three-legged – or wonky – donkey, adding a new adjective every few pages until it ends with a “spunky, hanky-panky cranky stinky dinky lanky honky-tonky winky wonky donkey”.

In a recent video made by her daughter, Scottish granny Janice Clark reads the story to her four-month-old grandson Archer, and laughs progressively harder as the donkey becomes increasingly bizarre. “Oh dear, how can anybody read this seriously,” Clark says. “This is going to kill me.” The video has been viewed more than 3 million times.

Smith told the Guardian that demand had “gone through the roof” for the picture book since the video of Clark took off: in New Zealand, his publisher is “rushing to print another 50,000 copies, with a view for more”, while The Wonky Donkey is now also being reprinted in the UK. Amazon in the US and the UK has sold out, while used bookseller AbeBooks said that it has sold “hundreds of copies” of The Wonky Donkey, amid “massive demand” around the world.

Although the picture book, which is illustrated by Briton Katz Cowley, had sold more than 1 million copies around the world to date, the majority of that was in Australia and New Zealand, said Smith, who hopes it will find a more global readership.

“The video is gold. Watching Janice read and laugh was just delightful, and like many, her infectious laugh had me laughing too,” Smith says. “I’ve always wondered why sales had not taken off so much in the UK and US, but that looks like that’s about to change.”