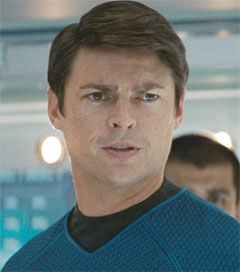 Urban is Bones No Doubt About It

Wellington-born actor Karl Urban, 40, is Doctor “Bones” McCoy, one of the series’ most iconic Starfleet crew. Urban has tackled many iconic sci-fi and fantasy characters on the silver screen, but perhaps none more influential than McCoy, writes Jesse Kuch for The Cairns Post. Urban says the key to nailing a well-loved character such as Bones is ensuring you keep the legacy of Star Trek alive, without trying to directly copy the performances of the actors before him. ‘First and foremost, it’s important he’s identifiably Bones,’ he says.” Urban played Judge Dredd in 2012’s Dredd. Star Trek Into Darkness is in Australian cinemas now.