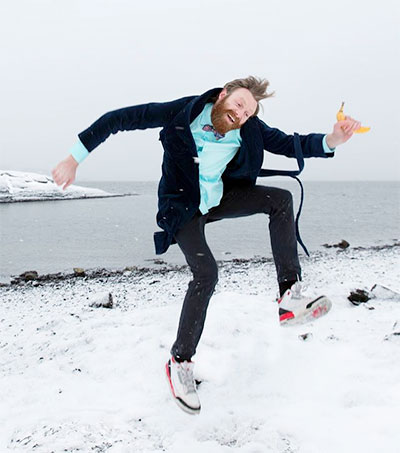 New Zealand comic Trygve Wakenshaw’s solo show Kraken, a follow up to his Edinburgh and London 2013 smash hit, Squidboy, is on at the Soho Theatre as part of the 2015 London International Mime Festival.

“Probably the most memorable sketch in Kraken, which contains many moments of silly joy, is when Wakenshaw becomes both a hatchling whose delight at seeing his mother turns to slowly-dawning horror as he realise just how he is to be fed,” Chortle reviewer Steve Bennett writes.

“Like every movement in the show … the physicality and timing is faultless as the pipecleaner-limbed performer demonstrating a millimetre-perfect control of his malleable body.

“…the perfectly-executed nonsense is full of hilarious moments that rightly put Wakenshaw on the comedy map.”

Time Out London said Kraken was their “absolute favourite comedy show from the 2014 Edinburgh Fringe … a blissfully funny hour of physical stream-of-consciousness and a joyous excuse to embrace your childish side.”