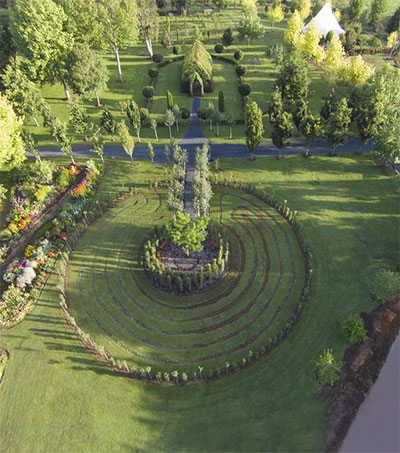 Barry Cox’s Waikato Tree Church is a “heavenly 100-seat chapel set among a three-acre landscaped garden … [Its] walls are made of living trees planted around an iron frame”, Slate magazine reports.

“In 2011, Cox, who runs a tree relocating business, decided that his backyard was missing an old stone church like the ones he had studied and admired on travels to Europe. So he decided to unite his passion for ecclesiastical architecture with his skills as a landscaper who specialises in replanting mature trees using a tree spade.

“The Tree Church was originally ‘designed to show how an instant garden can be created’ using a tree spade, [Cox] writes, adding that the church and a labyrinth walk he designed based on the ancient city walls of Jericho are a ‘welcome retreat from society.’

“[The Tree Church in Ohaupo] is also available for photo shoots, events, and has unsurprisingly become a popular wedding venue.”