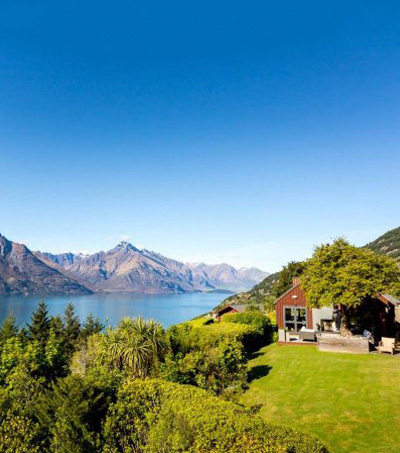 “Immortalised by Peter Jackson in Lord Of The Rings, tourists now flock to Queenstown’s frosty lakes and rolling hills every year in search of the same magic created by the films,” writes Jennifer Smith for The Daily Mail. While Queenstown is known for being an adventure sports capital, it also offers “thumping nightlife, chic restaurants and sophisticated spas,” according to the article.

Preferred Hotels & Resorts’ Azur Lodge, located only a five-minute drive from town, is “a small scattering of villas perched atop a hill” that overlook “the calm water of Lake Wakatipu.” The Lodge does not offer dinner, but “its charming staff will zip in to town to collect from local restaurants and plate up your dishes by the fire in your room,” writes Smith.

What lies beyond the hideaway is just as wonderful, according to Smith.

Apart from skydiving, paragliding and other adventure sports there’s a thriving culinary scene in Queenstown, nightlife is thumping and hot spring spa Onsen Hot Pools is only a 20-minute drive away.

“While the town and its modern delights are bountiful, scenery is really what the crowds come for,” writes Smith. On the drive from Paradise to Glenorchy, “it’s easy to see how Lake Wakatipu became the mythical Lothlórien woodland in Jackson’s film world.”

Smith also recommends visiting Arrowtown, which “is more quaint and has a more European atmosphere.”