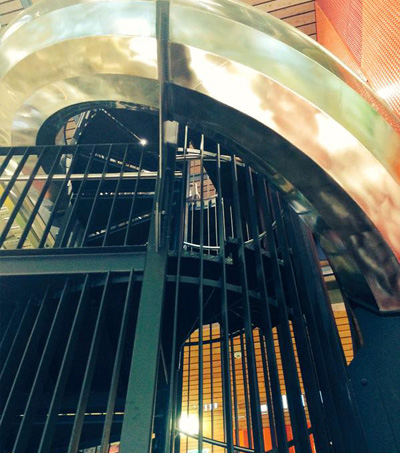 The company’s new headquarters are located right at the waterfront in Wellington with “a killer view of the Wellington harbour” and a fun atmosphere.

Trade Me’s company culture of “don’t be a dick”, which is all about – treating people with respect whilst maintaining a sense of humour is palpable in the office space.

All three office floors are connected by slides – one runs from the top right through to the bottom of the office, which makes for an efficient way to get around.

Like in school everybody has their own locker and there is a foosball table as well as beanbags facing the glass front.

While the office was being built, the team bought a caravan and parked it outside their future space. After several parking fines and construction of the first floor being completed it was craned into the office, where it stands today.

TradeMe – “the place where Kiwis buy and sell online”, was founded by Sam Morgan in 1999. Fairfax bought the site in 2006. By 2008 the site reached 1 million concurrent listings and in 2012 became a public company. Fairfax sold its 51% stake in Trade Me shares for $616 million.