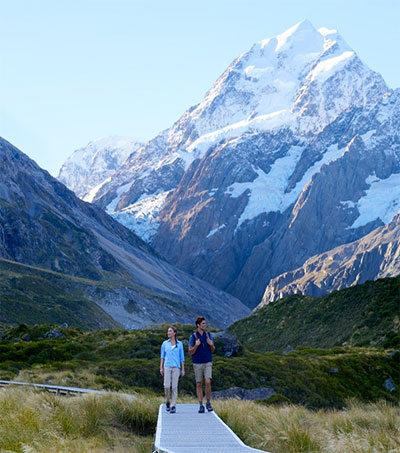 For a small island nation, tucked away in the South Pacific, New Zealand has an interesting challenge: to attract tourists to its picturesque shores, but not too many. Marketing and media magazine, The Drum investigates.

With limited space and beds, Tourism New Zealand, the country’s marketing body, must balance the country’s booming tourism industry with practical sustainability. In China, this translates to a strategy to target high-spending travellers. However, with tourism organisations from around the world competing for China’s 145 million outbound travellers, cutting through all the noise can be a challenge.

“One of the big things to note about the China market is that only 10 per cent of the population have passports, and there’s a lot of competition trying to attract those outbound travellers,” says Kieran O’Donnell, the North Asia regional marketing and communications manager for Tourism New Zealand.

New Zealand attracts just 0.3 per cent of China’s outbound travellers, which is around 400,000 visitors annually. O’Donnell says targeting that section of the market in China is “like finding a needle in the haystack”.

To target those needles, Tourism New Zealand partnered with Tencent to run targeted advertising on WeChat and set a new benchmark for the industry with a nearly 10 per cent click-through rate (CTR) in the process.

“We achieved the highest click-through rates of any brand in the travel industry on WeChat,” O’Donnell says. “We more than doubled the CTRs of our closest competitor and achieved more than ten times that of the tourism industry average. Our work is now a best practice case study for Tencent.”

It is an impressive achievement for New Zealand, a country which often struggles to be included on maps. However, despite its small size – and small budgets – the marketing organisation outperforms much larger tourism rivals such as Australia and the United States.

Tourism New Zealand targeted consumers using WeChat’s Ad Moments and followed them across the Tencent / WeChat ecosystem to retarget them, driving a 236 per cent increase in active visits, as well as a 254 per cent surge in referrals.

“The power of WeChat is so much more than the messaging element of the app and to only view WeChat as a social media app is to really miss the point and the potential. When used strategically it represents an immensely powerful media channel. As a brand, the access you gain to the wider Tencent ecosystem and the data available is invaluable. For a brand like Tourism New Zealand, which is ultimately a small government organisation, leveraging the Tencent / WeChat platform for marketing has been a gamechanger,” O’Donnell says.