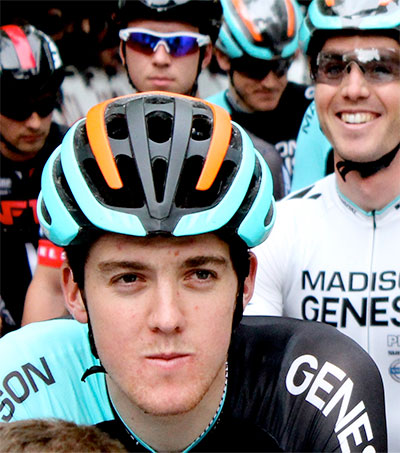 To meet the relentless energy demands of this year’s eight stage Tour of Britain professional cycle race, New Zealander Tom Scully is one of approximately 114 riders who must fuel up each morning, topping up their energy reserves during the race itself, and rapidly replenish their resources at the end of every stage.

At this month’s Tour of Britain each rider in the peloton will burn up to 6000 calories per day – that’s more than double the 2500-calorie daily intake recommended for an average male by the NHS.

Invercargill-born Scully, 24, who rides for Madison-Genesis and the 2014 Commonwealth Games points race champion, shares his food diary from the first two stages of the Tour to reveal how much fodder is required to complete a pro bike race, and how he adapts his food intake to match the demands of each stage.

Scully says: “We eat our last main meal three hours before the start of the race to allow enough time for the food to be digested. If you eat too close to the start, your blood is diverted to the stomach to aid digestion but you need this blood to go to your muscles instead.

“Rice is a good carb source because it provides energy but doesn’t upset the stomach. The soy sauce adds flavour – white rice can get pretty boring – and also provides some salts, while the olive oil provides some healthy fats for your body to use as fuel.

“Brioche with Philadelphia cheese and jam is a favourite amongst the team when we’re out on the bike. It’s moist and easy to eat and tastes great.”