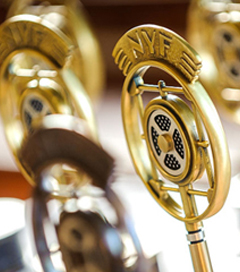 Radio New Zealand presenter Kim Hill has been awarded a Gold Medal for Best Talk Show Host by the Grand Jury at the 2013 New York Festival Radio Awards. This is Hill’s second major international award in the past year, having been named the 2012 International Radio Personality of the Year by the Association for International Broadcasting in London last November. Speaking of the recent wins Radio New Zealand Chief Executive Peter Cavanagh said that, “Kim has clearly been recognised as one of the outstanding broadcasters of her generation”. Hill presents a weekly magazine style programme, with feature interviews on current affairs, science, literature, and music, on Saturday mornings on Radio New Zealand National, a publicly funded non-commercial radio station.