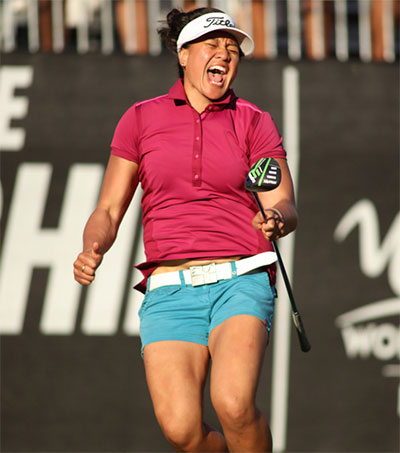 One of the newcomers to this year’s World Long Drive competition was New Zealander Phillis Meti, 30, who was the first female to compete in the Laughlin Memorial Hospital Tennessee Long Drive Shootout.

The field was packed with some of the best long-ball hitters in the sport, including more than half of the world’s top 25-ranked long drivers, including 2016 Ladies World Long Drive Championship winner Meti.

Though she didn’t win, Meti said before the event: “The thing about women’s long drive is that we don’t have a lot of competitions in preparation for the world championship. So in order to maintain that competitive level, I needed to enter whatever tournament would have me. Right now, as I try to get ready for the Worlds, I’ll take any opportunity to be in that competition mode.”

Meti spent eight years away from the sport to concentrate on tour golf, mostly in New Zealand and Australia, but she felt that made her 2016 world title that much more special.

“The game of golf requires a lot of time, commitment and effort. I felt like I had some things I needed to accomplish while I was at home and spending time with my family, so I stepped away from long drive for a while,” Meti said. “It was very special to win that last year.”

Meti heads to Denver, Colarado to compete in the Mile High Showdown building up to the World Long Drive championships in August.