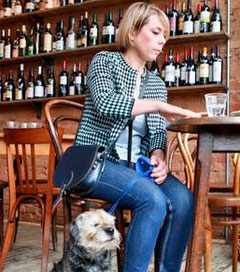 New Zealand-born chef Michael Hazlewood, together with manager Alex Thorp, has opened Toasted in London’s East Dulwich, where “wine [is] at the heart of a meal in an especially alluring manner”, according to London Evening Standard reviewer Fay Maschier. “Bottles decorate the windows of the premises. Three 300-litre stainless steel tanks – the sort you stare at dutifully during the downside of press trips to wineries – filled with wines sourced directly from the makers, dominate one of the dining spaces. A parade of bottles that turns out to be the booty acquired with the purchase from the previous occupants – the wine bar Green and Blue – line the walls and, with many of the labels water damaged, offers a deal that marries the notion of restaurant to tombola. Hazelwood, who has cooked in the UK at Soif and The Green Man and French Horn, has devised a menu that is short and to the seasonal point. Only prices indicate the status of dishes and we started by sharing a few of the obviously smaller plates. Hazel, as the staff referred to him – a name belied by designer stubble and the sort of branded arms that warrior chefs display – brought out exceptionally fine Tuscan salami, fat, wobbly, skinned raw mackerel fillets bathed in white soy and topped with crisp ginger, a sensationally fine heritage tomato salad crocheted together with toasted crumbs, and a wondrous dish of English peas with molten egg yolk, curd and nibbed almonds. On finishing it, we immediately ordered it again. Radishes have had their moment in the sun. Now it is the turn of labneh. Studded with pomegranate seeds it accompanied loin of lamb with fiercely roasted whole carrots. Haddock came with lemon verbena and leeks, pollock with tangled ribbons of courgette and quinoa.”