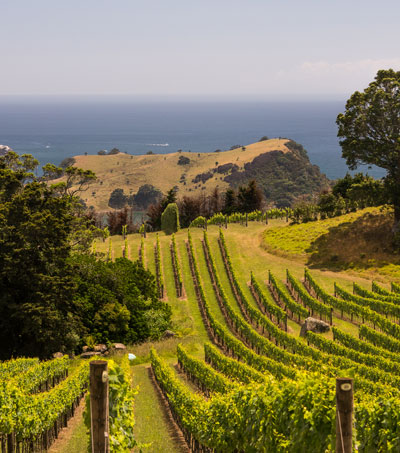 A Toast to New Zealand’s Wine

“New Zealand wine regions are at their most spectacular in fall, when the days are long and bathed in late sunshine,” as reported in an article in the Canada Free Press, which features some of New Zealand’s best wine regions.

“West Auckland is where New Zealand’s wine began, thanks to the Eastern European immigrants who brought grapevines with them,” reports the article, which highlights Kumeu River Wines, Waiheke Island, Matakana, Warkworth and Villa Maria Estate.

Gisborne, the fourth-largest wine region in the country, “is also informally known as the Chardonnay capital of New Zealand” and is the perfect place to “relax, Chardonnay in hand, during long autumn days on this sunny coast.”

The Hawke’s Bay region is “the country’s second-largest wine region, with nearly 5,000 hectares of grapevines”. Gimblett Gravels, “800 hectares of stony ground which absorbs, retains and radiates heat to red grapes such as Syrah, Malbec and Merlot”, is the best-known wine are in the region.

“The Wairarapa is home to only three per cent of New Zealand’s grapes due to the decimating effects of strong spring winds,” according to the article. The best wines of the region include Ata Rangi Pinot Noir, Nga Waka Riesling (dry), The Escarpment Vineyard’s Pinot Noir, Margrain Chenin Blanc and Martinborough Vineyard Chardonnay.

Marlborough has 141 wineries and is known for its Sauvignon Blancs, which now account for 85.6 per cent of the country’s exports.