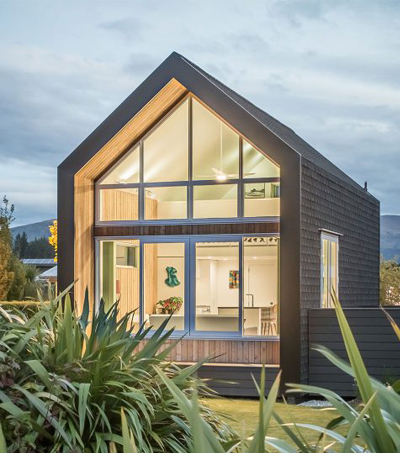 Tiny houses or “just building what you need” has become a big trend in New Zealand and Australia. Lloyd Alter spoke to Kulja Coulston, editor of Sanctuary Magazine which profiled several tiny houses recently. He reports for Treehugger.

“What’s interesting about the ‘teeny tiny’ houses we have profiled this time around is that they are all permanent residences rather than temporary dwellings, weekenders or secondary dwellings. They range from 24m2 to 57m2 and there are a range of reasons for people wanting to live at the smaller scale,” said Coulston.

Will and Jennie Croxford, who own a tiny house in Wanaka, said “they were “motivated by the freedom of living with less.”

“I think there is a growing appetite to live at a smaller scale without it having to be a ‘frugal’ statement,” said Will Croxford.

“At first I thought it was a bit ambitious – a 30-square-metre (322 SF) footprint [with mezzanine the total is 450 SF] isn’t a massive amount of space to fit a kitchen, bathroom, sleeping and living space,” said Condon.

“I actually tried a few times to make it a little bigger, but Will would always push back and try to make it smaller, which was interesting for me because normally with clients I am the one trying to reduce size! Ultimately we landed on a happy medium.”

“Besides being tiny, it is built to a very high standard ‘in keeping with Passive House principles’ with SIP (Structural Insulated Panel) walls and efficient windows,” reports the article.

“A lot of houses people claim to be sustainable are just enormous. We’re keen to show people that you don’t need to completely change the way you live to live in a tiny house,” said Jennie and Will Croxford.