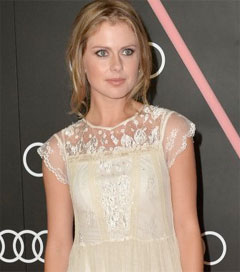 24 March 2014 – Star of American series Once Upon A Time New Zealander Rose McIver, who played Tinkerbell in the show, has been cast in the lead role of medical student Liv in zombie crime fighter pilot, iZombie.

McIver, who also played Vivian Scully in six episodes of Masters of Sex, is “forced to work in the coroner’s office when her, um, diet changes,” Variety reports.

“Eating brains comes with some side effects: with each one Liv consumes, she inherits the corpse’s memories. Partnering with her medical examiner boss and a police detective, Liv takes to solving homicide cases as a method of quieting the disturbing voices in her head.”

In February, McIver, 25, was cast as the adult Cathy Dollanganger in television film Petals on the Wind, adapted from the book by V. C. Andrews.

Tags: Auckland  iZombie  Masters of Sex  Once Upon a Time  Petals on the Wind  Rose McIver  Variety Magazine