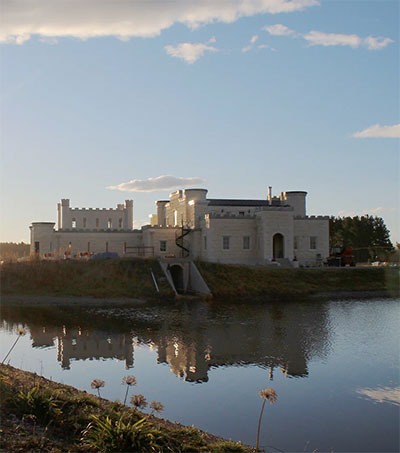 This Is the Castle That Dot Smith Built

As a child New Zealander Dot Smith dreamed of living in a castle. Growing up on an isolated farm in the 1960s entertainment was scarce – so Dot read, and planned her escape. Five decades later, after working seven days a week and living in a simple cottage, the Guardian’s Eleanor Ainge Roy reports, Dot is on the cusp of achieving that childhood fantasy.

After six years of toil employing one builder and one apprentice, her castle, located 20 minutes north of Oamaru – is nearly complete.

Riverstone Castle – crafted from Oamaru stone and locally felled macrocarpa – has a moat (though no drawbridge), an underground passageway and a dungeon – which is concealed down a flight of stairs in a secret library, accessed through a hidden panel in a bedroom.

Riverstone is designed and built to last centuries.

“The castle is forever. It’s not temporary, it’s not quick, and it’s not cheap. It will stand a long time after I am gone. I have worked my whole life to achieve this – it wasn’t going to be a knock-up job.”