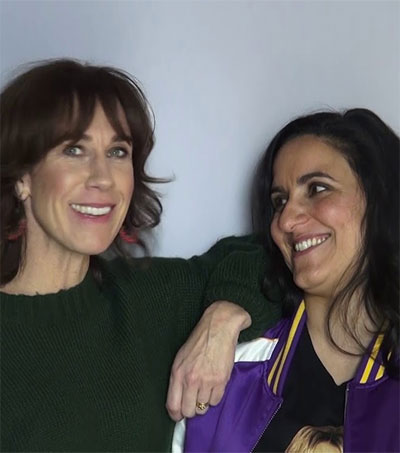 Van Beek was making coffee one morning when she conjured the idea for The Breaker Upperers, the duo’s homegrown hit comedy film now on Netflix: Two BFFs run a service helping clients “consciously, forcibly, and irreversibly uncouple” from the partners they can’t bring themselves to dump.

“I thought, ‘Who’s the funniest person I know in New Zealand?’ ” said Van Beek last year at the South by Southwest Film Festival, where The Breaker Upperers premiered. “And I rang Madeleine.”

Sami and Van Beek are constantly bouncing off one another, in part due to their improv backgrounds and to the chemistry that carries The Breaker Upperers – a convention-upending romantic comedy about female friendship, filled with New Zealand comic talents, and packed with ‘90s nostalgia that translates regardless of where in the world you grew up.

The last decade has seen Kiwi comedy go global, spurred by projects such as HBO’s Emmy-nominated Flight of the Conchords from Jemaine Clement and Bret McKenzie and films including Taika Waititi’s Hunt for the Wilderpeople, which hit US theatres a year before the director made his Marvel blockbuster debut at the helm of Thor: Ragnarok.

Now, Sami and Van Beek are poised to become the next New Zealand talents to break out, both onscreen and behind the camera. And they’re doing it while blazing a trail for other women filmmakers in the process.

No film has worked the power of French Canadian singer Celine Dion into its DNA quite like this one, in which a karaoke rendition of Dion’s “It’s All Coming Back To Me Now” triggers a flashback sequence filmed in the style of those cheesy, low-budget karaoke videos of yesteryear.

It’s a moment so epic that Sami – who does a spot-on Dion impersonation, vocal inflections and all – has been singing the song just about everywhere that the movie has screened in the last year, including in Los Angeles on a recent stop as she and Van Beek returned to the States to promote the film’s Netflix release.

“‘It’s All Coming Back To Me’ is one of my favourite songs and one of my favourite karaoke songs,” Sami said with a grin moments after delivering yet another committed rendition of the torch ballad in front of a karaoke crowd in a tiny Melrose Avenue bar, with Van Beek delivering a soulful interpretive dance alongside her.

“So much drama,” she said. “It was a perfect song because it’s very nostalgic and it’s all about remembering something … it’s such an anthem for loss and remembering and longing.”