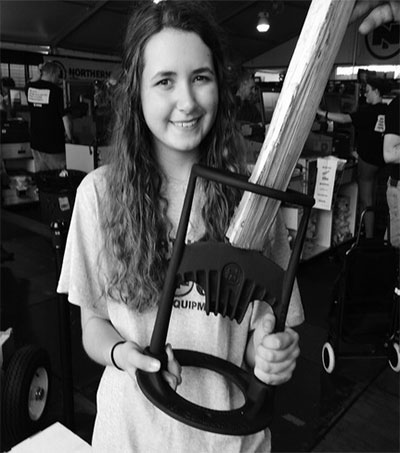 Ayla Hutchinson, 16, may be the youngest and farthest-travelling entrepreneur to showcase at the Minnesota State Fair this year. Hutchinson, who is from Taranaki, conceived of a safer approach to splitting kindling in 2012 after she saw her mother, Claire, slice her finger with a hatchet.

Ayla’s father, Vaughn, an engineer, who admits that he never would have thought of what has become the “Kindling Cracker,” built a prototype in his workshop.

Ayla’s idea, originally invented for a school science fair, ended up winning innovation awards in New Zealand. It grew into a Hutchinson family-owned business, which has granted US distribution rights to Burnsville-based Northern Tool & Equipment.

Ayla also is something of a teen-entrepreneur idol in her country. She has spoken to thousands of schoolchildren about academics and imagination. And she delighted a steady stream of visitors with her expert demonstration and easy way at the fair.

“It’s pretty cool,” she said of her notoriety. “I just go along with it.”