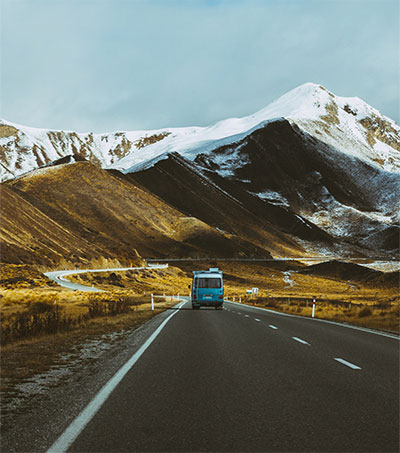 Driving from the Tip to the Tail of New Zealand

“Witnessing the sun rise over the ocean – and knowing you’re one of the first people in the world to see its rays that day – gave me an otherworldly sensation,” Minneapolis Star Tribune contributor Caroline Royce writes in a travel piece about a road trip in New Zealand.

“In the distance, dark, jagged figures grew more pronounced against a lightening sky,” Royce continues. “To my left, the imposing, snow-dusted tips of the Kaikoura Ranges became bathed in a hazy, deep pink. In front of me, the ocean, previously calm, began to ebb and flow with increasing urgency. Above, the patchy sky was ablaze with hot pinks, fiery oranges and pale blues, and I thought of the Maori name for this country: Aotearoa, which means ‘land of the long white cloud.’ The spicy aroma of Norfolk pine and the sound of crashing waves filled out the rest of my senses.

“Five days earlier Alan and I had arrived in Auckland early in the morning after a 12-hour flight from San Francisco. Our objective was ambitious: to drive across New Zealand, from the top of the North Island to the bottom of the South Island, in two weeks’ time. Along the way, we’d go on once-in-a-lifetime adventures, see incredible sights and stay in choice accommodations.

“By the end of our trip, Alan and I had logged 1000 miles on the road, and felt like we’d seen a bit of everything – barren volcanic terrain; lush, steaming geothermal valleys; and mossy green sheep farms – and yet had barely scratched the surface.

“New Zealand is a tiny nation in the South Pacific, only a little bigger than Minnesota, yet it somehow manages to pack in great diversity of climate and landscape.