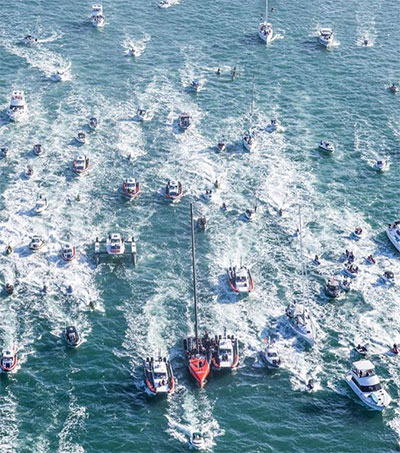 Team New Zealand has retained the America’s Cup, “speeding away from its Italian challenger Luna Rossa to claim sailing’s biggest prize in its home waters,” Andrew Das reports for The New York Times.

The victory was the second in a row for a syndicate representing the Royal New Zealand Yacht Squadron, and the fourth win in the finals since 1995 for a team from New Zealand.

It also marked the second victory in a row for Team New Zealand’s 30-year-old helmsman, Peter Burling, who added another title to a résumé that already includes nine world championships and Olympic gold and silver medals, Das writes.

“It means the world to us and the team,” Burling told Radio New Zealand.

This year’s America’s Cup was contested by a new class of boat: sleek, 75-foot foiling monohulls which – when raised out of the water and riding above the waves on their spider-like foils – were capable of speeds of as much as 60 miles an hour. The boats did not so much slice through the water as glide above it. And none did that better than Team New Zealand.