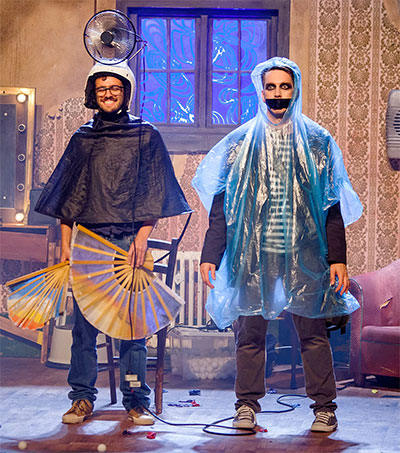 Fresh from a stint on America’s Got Talent, New Zealand comedian Sam Wills, aka Tape Face, recently preformed in Milton Keynes, delivering “a captivating set of skits that [brought] the audience on stage and celebrate[d] the improbable,” according to Guardian reviewer Brian Logan.

“The most successful skits [of the show] come when Wills – so expressive despite (because of?) his gaffer-taped mouth – develops a relationship with his volunteers,” Logan writes. “His furious glare as three stooges fail to master their dance moves; the priapic swagger as he and a punter compete to elongate tape-measures – these moments find Wills at his most captivating.

“They’re all united by the conceit that everything’s taking place in Wills’ head as he snoozes before the show. Is the suggestion that Tape Face’s stunts are too whimsical to actually be the show? Maybe so – and yet, they add up to a winning two hours of party comedy, a celebration of the improbable, wordless things you can do with domestic objects and popular songs.”

Tape Face continues his tour in the UK before heading to the Netherlands in January 2017.