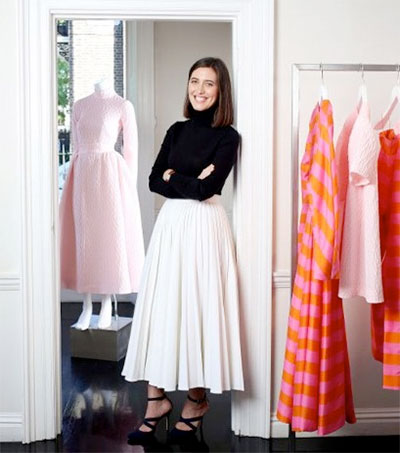 Stylish Emilia Wickstead the Embodiment of Her Brand

“Wickstead makes clothes for women who have tennis lessons on a Wednesday morning and poached salmon for lunch,” Pithers writes.

Among her fans are the Duchess of Cambridge, who wore a marine blue, pleated dress by the New Zealand-born designer on her recent Antipodean tour, and Samantha Cameron, as well as scores of smart west London ladies.”

“The autumn/winter 2014 collection, however, was a departure from the gelato pastels and prim styling we’ve come to associate with Wickstead.

The show, held in London in February, was all python, leather, metallics and black.

What inspired her new direction?

‘In previous seasons I think I had been pigeonholed,’ she says carefully. ‘And yes, the fabrics and textures were different. But that silhouette was still true to Emilia Wickstead.’ She thinks for a moment. ‘Maybe I’ve just become a bit cooler?’ She erupts into giggles.”

“Wickstead is the embodiment of her brand. She dresses almost exclusively in her own label, and cites polo necks and her ‘Paolina’ trousers as her fail-safe outfit. ‘I have Paolinas in every colour and fabric – I’m crazy about them,’ she says.