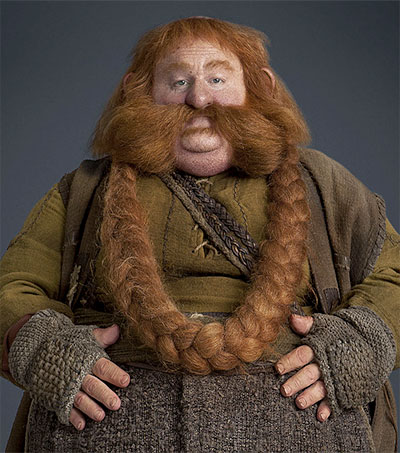 You might not recognise New Zealand actor Stephen Hunter, 46, from one of his biggest film roles without a bushy red beard, a huge, ring-shaped plait of red hair and a lot of bulky prosthetics, Natasha Rudra writes for the Canberra Times.

Hint: he also spent a lot of time eating in the film.

Wellington-born Hunter played Bombur, one of the 13 dwarves in The Hobbit trilogy. He’s currently in Canberra filming another film, the sci-fi adventure Blue World Order.

Hunter looks back on the epic, four-year shoot for The Hobbit movies with fondness. We had 13 dwarves plus Ian McKellen and Martin Freeman, who were the core, and very good characters who came in and out like Lee Pace, Orlando [Bloom] and those guys,” Hunter says. “That core group of guys, we really got very close, we had a big trailer park and we all had our trailers, it was a big production and we had it all laid out. It was a bit like being at school – those guys are friends for life.”

It took hours of makeup, costume and prosthetics to transform Hunter into Bombur – the largest dwarf in the group, and the one who enjoyed food the most. So he doesn’t have to worry too much about being recognised on the streets.

“One of the benefits of my prosthetics is that I’m not instantly recognisable as that character. That was certainly the biggest movie role I’ve done,” he says. “But in Blue World Order, the character of Madcap is a bigger role and it’s like a lead supporting role, it gives me a lot more room to do something with the character.”

Hunter is based in Sydney.