NZEDGE  >  News  >  Arts  >  Staring Down the Barrel with Aldous Harding 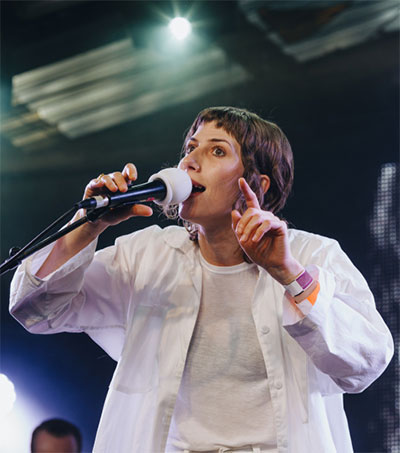 Staring Down the Barrel with Aldous Harding

Aldous Harding’s sophomore album Party has every right to stake its claim as the best album of last year, according to Melbourne-based lifestyle website Broadsheet. The power of Harding’s voice was only hinted at on her self-titled debut, but on Party that voice transforms restrained piano and electronic drum patterns into songs that are towering monoliths.

The disappointment of un-met expectations is brought up more than once on Party. At the same time, Harding’s lyrics push back against the expectations placed on the singer. “Here is your princess … and here is the horizon,” Harding sings.

Her lyrics can be dense and obtuse. Sometimes they’re blindingly direct and in other moments Brothers Grimm fanciful. The play between impenetrability and being welcomed into an inner sanctum is what makes her music so exciting.

“I want people to feel a certain way … The idea that they don’t isn’t always devastating because it’s out of my control. I don’t want people to think it’s ridiculous, but of course a lot of people do, but I can’t do anything about that,” Harding tells Broadsheet.

Throughout a muscular performance of “Horizon” last year on Later… with Jools Holland Harding fearlessly stares down the audience like she’s checking the barrel of an old shotgun for cobwebs. Even the shooter behind the camera seems afraid to meet her gaze. It’s hard not to view the grimaces and facial contortions in the performance as a direct challenge to entrenched male ideas of femininity, but some of it simply comes down to necessity.

“To be honest, I’ve always done fucked up things with my face to get the sounds out. When I try not to do it, I can’t get the sounds that I need. I’m not interested in looking beautiful.”

It’s no accident Harding is spoken of in the same sentence as groundbreaking musicians Lorde, Joanna Newsom and Björk. She’s brave, technically gifted and experimental. And she takes criticism – anonymous and not – voiced on the internet in her stride.

Harding supports Perfume Genius at the Auckland Arts Festival on 15 March. She heads to Europe later that month performing first at Shepherd’s Bush Empire in London on 28 March.