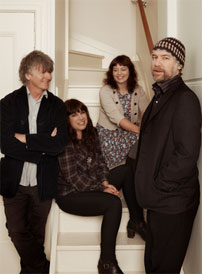 Neil Finn’s “Kraut-inspired” Pajama Club recently performed a special set on Later With Jools Holland enlisting Ladyhawke on drums. Pajama Club also features Sharon Finn, Sean Donnelly and Alana Skyring. The band played ‘Tell Me What You Want’ from their self titled debut. It was “New Zealand squared to the power of awesome,” according to Pedestrian TV.