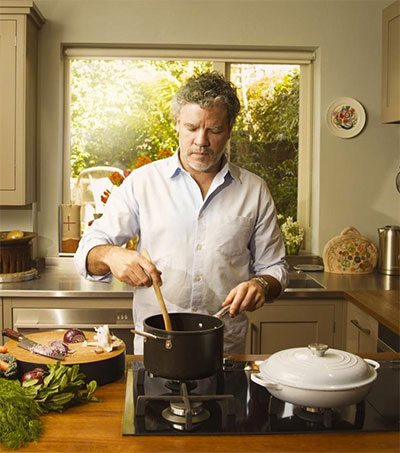 The “Godfather of Fusion” New Zealand chef Peter Gordon talks to the London Evening Standard about the dishes and wines he’s been enjoying this week.

“Fusion food takes, as its starting point, the belief that any ingredient, from any part of the world, has the potential to be cooked and eaten. Who is there to say, for example, that we must never use a Malaysian ingredient in a traditional Yorkshire dish?”

So says Peter Gordon. Originally from Whanganui, Gordon is renowned for his ability to take ingredients from around the world, distinctive Asian and European flavours, and allow them to sing together in perfect harmony on the plate.

You may think fusion-style cooking is old hat – who doesn’t cook like this now? – but Gordon pioneered this style of cooking in Britain in 1995, as executive chef at Notting Hill and Soho outposts of New Zealand restaurant brand The Sugar Club. And he does it with an elegance and ease few others have mastered before or since. As well, he co-founded The Providores and Tapa Room in Marylebone High Street, with the business now in its 15th year.

Having such a creative approach gives a refreshing twist on wine and food pairings, as Gordon reveals the dishes and wines he’s been enjoying from The Providores and Tapa Room this week:

“I love the endless possibilities [of food and wine], and the variety of produce from around the world. Because I view the globe as my pantry, anything is up for grabs. If I was only cooking the food of one region in one country, I’d have less fun. Having said that, our still-wine list at The Providores only lists New Zealand wines – we have the largest selection of any restaurant in Europe, and we do this out of a sense of duty, and because we’re incredibly proud of the wines we make there.”