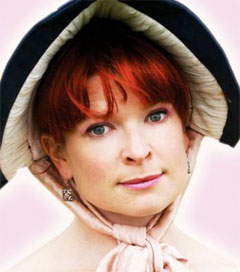 Spiffing Stuff on Stage at the Edmonton Fringe

Edmonton Journal reviewer Elizabeth Withey gives Ashton’s show 4.5 stars out of five describing the performance as, “a properly fun farce that pokes fun of the pompousness and classism pervading the age.” “

This high-energy parody centres on Elspeth Slowtree, a literary smarty-pants who at the ripe old age of 22 would rather write than play some dude’s ‘cabbage for a wife,’” Withey writes. “I don’t know what Ashton uses as fuel but it’s working; she’s full of vim and vigour with loads of accents and charming characters (snorting, unctuous cousin Horatio takes the prize, and Thomasina Jeggings is a close second). Lots of sexual innuendo and anti-French jokes to keep you tittering for the duration of the show.”

Ashton is also a wedding celebrant.