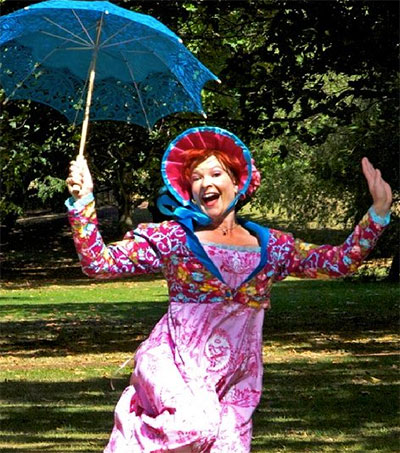 “The one-woman musical-of-sorts, [Promise And Promiscuity], which New Zealander Penny Ashton says was co-written by her and Jane Austen (as we approach the 200th anniversary of Austen’s death), the often hilarious Promise and Promiscuity plays like a staging of a long-lost Austen novel in which almost every character is a fabulous, toffee-nosed twit,” DM Bradley writes for the Adelaide Review.

“Much witty fun is had with several songs. One is a pirate love ballad set to the tune of Greensleeves and another proves to be a wonderfully ghastly mash-up of Beethoven and Bon Jovi.

“A capital evening’s entertainment (as one of Ashton’s personae might have said), this devilishly clever and spiffingly enjoyable offering is such a jolly lark that you can’t help but think even Jane might have cracked a smile.”