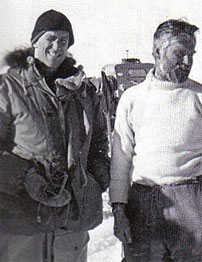 A new book by New Zealand journalist and respected author on Antarctic explorers John Thomson says Edmund Hillary “cheated” his way to the South Pole in 1958. Thomson, author of Climbing the Pole, says Hillary was so desperate to cement his reputation as a great adventurer he double-crossed Dr Vivian Fuchs, his British expedition leader, and the New Zealand body that had hired him. Surprisingly little has been made of Thomson’s allegations in New Zealand. “Just a deathly hush,” Thomson says. For many, particularly in Britain, Hillary v Fuchs was a replay of the heroic race between the “sneaky” Amundsen and their fallen hero Scott. Thomson believes the Antarctic detour tarnished Hillary’s reputation. “But the average plain-speaking Kiwi probably regards Fuchs as a poncy Pom with a stiff collar who had to be shown the way … Hillary will be remembered at home as knocking another bastard off … and few will be caring what the rest of the world thinks.”