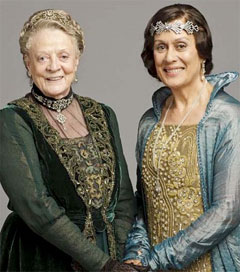 Dame Kiri Te Kanawa, “one of the greatest opera sopranos of the past 40 years”, has joined Downton Abbey for a single episode to play Australian soprano Nellie Melba. The Telegraph’s Laura Thompson meets her in a suite at London’s Mayfair Hotel for an exclusive interview.

“This is a particularly splendid feather in Downton Abbey’s cap. What is extraordinary, however, is that the legendary Dame Kiri [pictured here with Downton star Dame Maggie Smith] is quite sincerely ecstatic to be part of the programme,” Thompson writes. “Like 120 million others around the world, the New Zealand-born goddess of the opera house is a bona fide fan.”

“‘I nearly choked when I saw the email that invited me,’ she says, before describing how, during a stay in New York, she downloaded the previous series then watched it every night in her hotel room. ‘I rationed myself to an episode at a time. Once I did watch three at a sitting. They’re like chocolates. You try and just have one…’

“As Nellie Melba she gives two of her character’s favoured pieces: the Puccini aria O Mio Babbino Caro and Dvorak’s Songs My Mother Taught Me. Although the material had been pre-recorded in Vienna, she sang on set – where every cast and crew member congregated to listen – and it is, indeed, this live version that will be heard in the broadcast episode.

Dame Kiri appeared in the third episode of the current series of Downton Abbey, which screened in the UK last week.